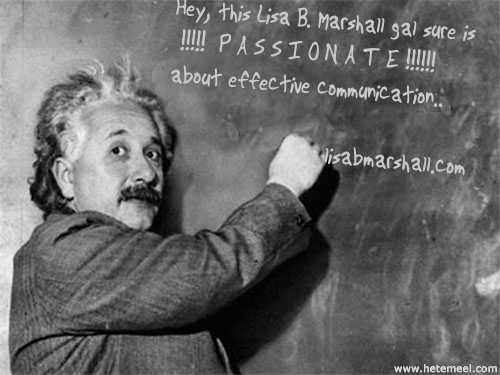 “Everything should be as simple as it can be, but not simpler.” – Einstein

Recently I’ve noticed more and more infographics being used on blog sites, however, I’m still seeing too many executive presentations that present data in text form only and research presentations that contain excessive data that does not directly support the main point being made.

I often coach executives and scientific researchers who have difficulty presenting complex financial and research data clearly and concisely. Although most agree it is much easier to understand complex data when it’s presented in visual form, the problem is how to do it effectively. Recent research confirms our brains are wired for visual images the problem is it is difficult to create visual images that present complex data. It is difficult to accurately and concisely present information instead of raw data.

And it takes time and effort to create clear, concise data in visual form. In fact, in David McCandless’ 2010 TED presentation, The Beauty of Data Visualization, he mentions that it took him two months to create a single slide. Although I think most people won’t ever spend a month or two creating a single slide, it does take more than a few minutes to create an effective data graphic. However, the time invested in creating a slide “as simple as it can be, but not simpler” is time well invested. If you need to present data and watch this TED presentation to get an idea of the power of visualizing data.

An Example of Presenting Data

To get a better idea of how to apply this to scientific and financial data here is a “before” slide containing a table of research information.  (This is a real slide that I received from a client.) This table shows some of the variables that were collected in this study. We combined the CT and TT genotype, in the any T group. T-allele carriers were more likely to have a lower BMI and had a higher prevalence of the CYP2C9 *2 or *3 allele, which is consistent with the association of these characteristics with Caucasian race.

So let’s look at the changes that were made in the after slide. First, I am not a big fan of using university crests on slides. Why? Because all crests look very similar and do not communicate any information. In fact, it’s distracting. Science slides are complex by nature, why add even more complexity; especially when it add no additional value. In the same way, I think company logos should be reserved for the first and last slide of internal presentations.

An exception might be an external sales presentations, in which case you may want to include a logo on every slide. If you’re representing an organization, you may be required to include a company logo on every slide. To keep it from becoming a distraction, consider stashing it in the bottom right corner of each slide and/or making it slightly transparent. In Keynote, select the logo and move the Opacity slider at the bottom of the Graphic Inspector to the left. In PowerPoint, double-click on the logo to open the Format Picture dialog box; then move the Transparency slider under the Colors and Lines tab to the right.

Next, it’s important to reduce clutter. According to Edward Tufte, sometimes referred to as the “visual Strunk & White,” information consists of differences that make a difference. What he’s saying is that when the information is presented in the most basic form, that’s when it’s easiest to draw attention to the aspects that are important. It is important to “hide” that data which does not make a difference in what you are trying to depict. When applied to the above example, we see that we quite a bit of extraneous detail could be eliminated from the table to make it clearer and stronger.

Next, while the overall n values were important, the n values for each characteristic did not communicate any information, it was the percentages that carried meaning. Notice how all the clutter was removed leaving only the percentages. Notice that the percentages were just estimates and therefore could be rounded to whole numbers without changing their meaning. 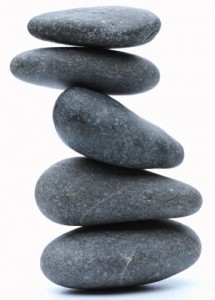 Another important step was to simplify and clarify the labels in the table. The generic and obvious label of “variable” was removed. The “gender” label was specified and changed to “male.” A few of the other labels were clarified, but perhaps the most important clarification was labeling the two groups as T-allele carriers and non-carriers as this was the main comparison of the graph. Another important change is the order of the data, notice that it was reordered to match how the result was communicated.

The final changes on the after slide draw attention to the important differences. Especially with a big table of numbers, it always important to highlight in some way the specific entries in the table that you want your audience to focus on. Actually, if possible, it better to present only the relevant data, however, at times, for purposes of completeness, the remainder of the information still needs to be part of the table presented.

Ultimately, this table graphic could have been taken one step further, with the two relevant variables presented on a bar graph. A graph is a pictorial table, which is easy to look at and decipher and usually a little more fun to look at. Graphs primarily show trends when the numerical data isn’t as important as the shape of the data. Usually a graph is used with data that shows an interesting picture of the relationship between numbers. In this case it is a simple comparison and a bar graph could have been effective, however, the speaker wanted to talk briefly about the other variables as well and chose not to convert to a bar graph.

Here are even more details how to choose the right kind of tables, graphs, photos, diagrams and more.

Of course, the definitive source of the graphic display of information can be found in the books of Edward Tufte. He has written seven books, including Visual Explanations, Envisioning Information, The Visual Display of Quantitative Information which are the most relevant to effective presentations.

Thank you very much Lisa for sending weekly letters. I am thinking to create a slide show presentation of my self instead of writing a simple resume. I want to use it to find the right place for me in a team, in a company, school, business, so on. Have a beautiful day! Your communication.. is my success. ;)).